As mentioned in my earlier post, I was in discussion with my Sunday School teacher and we verred into the topic of faith.  This topic addresses the first Greek word in our table below

He had told me there are a number of Greek words in the New Testament that are translated “faith” in our English Bible, and I let him know I thought otherwise.

So I came home and did a quick study, using Blue Letter Bible web site.  The following table gives a summary of the New Testament Greek words used when describing our English word “faith”.

We will look at three of the four instances that Jesus (and only Jesus) used this Greek word in the following post.

And Peter answered him, “Lord, if it is you, command me to come to you on the water.”
He said, “Come.” So Peter got out of the boat and walked on the water and came to Jesus.
But when he saw the wind, he was afraid, and beginning to sink he cried out, “Lord, save me.”

Jesus immediately reached out his hand and took hold of him, saying to him, “O you of little faith, why did you doubt?”

In our last post, Jesus rebuked the disciples for littleness of faith. They were poverty stricken of faith.  I noted that they had been given much teaching, personal interaction and many miracles to base thier faith on.  In this passage, the disciples had spent an additional few weeks (possibly more) since the previous rebuke, and received additional teaching and miraculous experiences

In this passage, the disciples are in a boat again, and it is in the middle of a storm, but it is Peter that “risks it all”

You gotta give it to Peter for his willingness to step out.  He saw the example of Jesus on the water, realized that as a disciple, he was to mimic the Master.  He verified the identity of the Master (Lord if it is you…) and asked for the empowerment (command me to come…).  Both of these prayers are commendable.  As believers, we are to verify the voice we are following, since there are many out there seeking our attention.  Secondly, we need to have the command of God to base our actions upon.  Both Peter did!

He jumped out of the boat and kept his eyes on Jesus.  Is this foolhardy?  Yes!  The lake was deep, full of danger, and cloaked in darkness.  When the surrounding exterior conditions became Peters focus, he began to sink into them.

How common for me to start out with my eyes on the Lord, anticipating no resistance or failure since He is so kind and good.  When I start to fall, slip or go under, my first response is to consider Him to have failed me.

I need to hear the Lord’s rebuke, the status of my faith.  Reality checks are critical if we are to walk in truth.  My commitment to obey requires accountability and Jesus is faithful in supplying this, if we will listen.  If we listen.

Peter listened.  Did he experience shame, loss of stature among the brethren, increased doubts?  Maybe.

Did he eventually become a man of God?  Definitely. 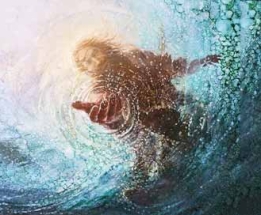 Note that upon sinking, Peter cried out to the Lord.  Immediately Jesus rescued him.  No longer did Peter walk on the water, looking to Jesus.  Jesus physically held on to him, but spoke of his littleness of faith.

In the midst of this obedience, Peter saw the tumult of his surroundings and doubted.  Peter doubted and did not pass this test.  But he stayed in the “game” and the Lord continued to challenge him, working with him in Israel for decades after, establishing the mother church and leading many to know Him.

How about you?  The last “test” you were provided?

How did you do?