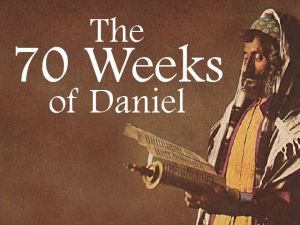 Daniel 9 is a linchpin of prophetic teaching.

As I have studied this topic over the years, a particular teaching has garnered favor among believers. I followed that teaching faithfully for most of my pilgrimage.

I would like to offer an alternative viewpoint for a fellow believer to consider.

When I first encountered this viewpoint, I struggled with it. I refused it, then ignored it, then argued with it. But I also believe as Christians, we need to wrestle with the Word.

Sure, we may come away limping, like old Isaac, but as always, encountering the Word produces fruit.

So with that thought let’s begin Considering the Bible.
I’m glad you came back. A little surprised since so few, at least in my experience, are willing to consider alternate viewpoints to Bible passages.

I admit, it is comforting to be settled in a belief system, and yet, when my faith was challenged and I couldn’t avoid the conflict, I found great peace in releasing my hold on deeply held opinions. It is good to fear the Lord.

“Seventy weeks are decreed about your people and your holy city, to finish the transgression, to put an end to sin, and to atone for iniquity, to bring in everlasting righteousness, to seal both vision and prophet, and to anoint a most holy place.

So let us proceed into the first thought in Daniel 9:24. My plan is to look at each of these lines within the couplets and see if the New Testament can shed some light on this prophecy

To Finish the Transgression

Dang – Right away I got a problem.

What in tarnation is Daniel trying to say. At first glance I thought the New Testament would be able to give me direct associations of the transgression with the rejection and murder of the Messiah.

During the Lord’s condemnation of the Sadducces in Matthew 23, we hear Him speaking of the fathers filling up their “guilt jar”.

29 Woe unto you, scribes and Pharisees, hypocrites! because ye build the tombs of the prophets, and garnish the sepulchres of the righteous,

30 And say, If we had been in the days of our fathers, we would not have been partakers with them in the blood of the prophets.

31 Wherefore ye be witnesses unto yourselves, that ye are the children of them which killed the prophets.

32 Fill ye up then the measure of your fathers.

In the Old KJV, the measure is commonly referring to a vessel. One good example is in Genesis 15:16, where the passage describes a vessel, being filled up with the sin of the Amorites.

In Matthew 23:32, the Lord is referring to the sin contained in the vessel of wrath that rejecting the Son of Man would accomplish.

That rejection would fill that vessel up to overflowing!

A few verses later (vs 36), the Master, after convicting the Pharisees of thier identification with thier fathers, states that all these things (described in verses earlier) shall come upon this generation.

It is very provocative that Jesus referred to the generation He was speaking to at that time.

Remember this passage is time dependent, just like Daniels…

The same thought is brought out when Paul speaks of the churches persecution under the Jews.

14 For ye, brethren, became followers of the churches of God which in Judaea are in Christ Jesus: for ye also have suffered like things of your own countrymen, even as they have of the Jews:

15 Who both killed the Lord Jesus, and their own prophets, and have persecuted us; and they please not God, and are contrary to all men:

16 Forbidding us to speak to the Gentiles that they might be saved, to fill up their sins alway: for the wrath is come upon them to the uttermost.

The CSB translates the phrase “As a result, they are constantly filling up thier sins to the limit.

The apostle Paul, whose heart broke for his people, the Israelites, realized that the Jews actions were condemning them, that they had abandoned the favor of God, and wrath was to come upon them..

But I wasn’t quite satisfied. Could there be more to this phrase “to finish the transgression”?

The next approach was to consider the couplet refrain of the Hebrew poetry that we mentioned earlier in the blog. The main thought in the first couplet seems to be Gods dealing with sin.

Again the New Testament gives us some good news.

26 For then must he often have suffered since the foundation of the world: but now once in the end of the world hath he appeared to put away sin by the sacrifice of himself.

“To put away” is the greek word athetesis, and it can be translated abolition, disanulling, and rejection. The thought of abolition of sin and finishing a transgression seems to have some parallels.

It is not possible that the blood of bulls and of goats should take away sins… But this man, after he had offered one sacrifice for sins for ever…hath perfected for ever them that are sanctified…And their sins… remember no more”

“Hath perfected” is the greek word teleioo, and means to make perfect, to finish, to complete, to bring to a close, to bring to an end (goal). It is of the same root word that is translated “It is finished” in John 19:30. The verb “hath perfected” (or to finish) is describing the saint in the Hebrews passage.

Being perfected by the sacrifice of the Master certainly finishes transgression in the believer.

I am not trying to defend sinless perfection – I know myself too well. But the scriptures do give support to sin being done with in the believers life – See Rom 8:1-4, I John 3-4-6.

I think I am considering a concept (finishing the transgression), that isn’t spoken of in Daniels text.

I went a bit further in my study and found that the verb “finish” is from the Hebrew word kala (H3607) and is usually translated as restrict, restrain, withhold, shut up, keep back, refrain, forbid.

Only once did the translators decide to use the word finish when translating this hebrew word.

So how does this effect the interpretation? “To finish” has the connotation of completion, of a conclusion, culmination, consummation. To be restrained is not necessarily so. To restrain, or to restrict requires the existence of the item being restrained, therefore this may allow, even require for the existence of sin to be present, in order to be restrained.

This twist in my understanding of the passage is quite exciting.

Did not the Messiah’s death and resurrection bring a lively motive in every believers heart and mind to say no to sin (restrain, resist, keep back, forbid sin!) and yes to righteousness?

I’m glad I dug a bit. I encourage all y’all to dig with me as we are “Considering the Bible”.

Thanks for visiting. May God the Father bless you today.