Biblical prophecy has a purpose. Am I sure I get it?

A few days back I was listening to Mark 15 and a few verses grabbed my attention.

Joseph of Arimathea, a respected member of the council, who was also himself looking for the kingdom of God, took courage and went to Pilate and asked for the body of Jesus. Pilate was surprised to hear that he should have already died. And summoning the centurion, he asked him whether he was already dead. And when he learned from the centurion that he was dead, he granted the corpse to Joseph. And Joseph bought a linen shroud, and taking him down, wrapped him in the linen shroud and laid him in a tomb that had been cut out of the rock. And he rolled a stone against the entrance of the tomb.

In that passage, Joseph of Arimathea took the body of Jesus, wrapped it in fine linen and placed it in a tomb.

OK – so did he perform this action out of obedience to the Word?

Did he see an Old Testament passage and decide to take action to fulfill the prophecy? The text says that Joseph “took courage”, but does not define the motivation of the action. Was it simply to bring some honor to his Rabbi, or was it due to his seeking to obey Isaiah 53:9.

And he made his grave with the wicked, and with the rich in his death; because he had done no violence, neither was any deceit in his mouth.

In this instance, the text seems to teach that the fulfillment of the prophecy was not Joseph’s objective.

Well – if that is generally true of prophecy, do we in the modern church look at Biblical prophecy correctly?

Do we try to find out the future for our own purposes? Granted, some information – the Olivet discourse comes to mind – was given to the apostles prior to the destruction of Jerusalem, that they might escape the judgement of God through the Roman armies on the nation of Israel.

Even considering the Olivet discourse though, might the higher purpose of that prophecy be somewhat different from merely saving the disciples lives? After all, most of the apostles were going to be martyred, and persecution was going to fall on the church shortly after the fall of Jerusalem.

I suppose the general thought of trying to figger out the future is very popular among western Christians of a certain stripe. I admit I used to delve heavily into future forecasting, but am now considering the wisdom of that attitude.

A year or so back, a particular passage in John got me thinking. Actually, when I read it carefully, it created more questions than answers! Jesus is talking to His disciples, telling them of a particular future event and actually lets them know WHY He tells them.

I am telling you this now, before it takes place, that when it does take place you may believe that I am he.

Did you catch it? “…that, when it is come to pass, ye may believe that I am he.”

The purpose was to direct the disciples faith to the person of Christ after the fulfillment of the prediction, not to instruct them on how to save their own bacon. Not for some temporal reason, but to direct the attention to the Messiah.

Could this be the highest purpose of prophecy?

Should we consider this to be the primary focus of prophetic interpretation?

When we come to a particular prophecy in the Word, would this concept 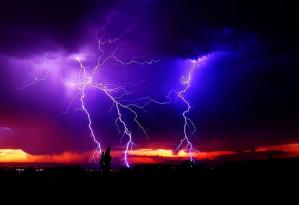 help us to know the heart of God better?

Would it help us to rest in Him instead of hurrying about protecting ourselves from what we think may happen?

Lets consider Biblical prophecy to be a gift, not to primarily inform us of future events, but direct our attention to the One who is faithful!