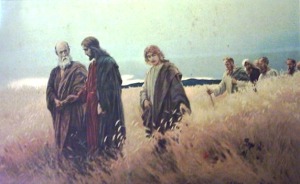 Recently I penned a series of post on the Ten Commandments and as I was writing it, found that the Sabbath day was the only commandment not reapplied  to believers in the New Testament.

In writing that series of posts, I was reminded that the Sabbath day was one of the main irritants between the Lord Jesus and the Pharisees.

In our last post, we found that Jesus culminated His logical refutation of the Pharisees claims by stating He is the ultimate authority.   Jesus applied logic to the situation, and yet the religious heart is so resilient in it’s stubbornness.  Irrefutable logic enters not a hardened heart.

In the following posts, Jesus reveals His authority in the midst of the Pharisees, in their synagogue, reinforcing His logical argument with an act of love for a poor crippled man.

Let’s continue considering the Sabbath in relation to the Messiah, and by association with His followers

Matthew 12:9  He went on from there and entered their synagogue.

I get the impression that Jesus went directly from the field to the synagogue.  He entered their synagogue.  He went straight to the “fight”.  He didn’t shy away from a controversy, although there are many times when He simply refused to enter into an argument with someone.  This is wisdom personified.  (Lord give me wisdom!)

Consider when the Pharisees caught a woman in adultery (John 8:36).  He simply bent down and started writing in the sand. No defense or rebuttal.  A simple action.

But this is not the Messiah’s approach here.  It seems He sees the Sabbath laws that the people of Israel were under as an issue that required addressing and what better place than the very synagogue that produced the instigators in the previous passage.

Matthew 12:10  And a man was there with a withered hand. And they asked him, “Is it lawful to heal on the Sabbath?”–so that they might accuse him.

Will these folks never learn?

I am assuming that those instigators that met Jesus and His disciples in the field earlier in the day made it back to their synagogues just in time to enter into a discussion with the Lord.  Golly – If that is true, what a tenacious faith in the ultimate priority of the Sabbath.  They were soundly refuted earlier, but they just gotta keep trying.

How often do we keep trying to justify a practice, habit, lifestyle, religious way in front of the Lord before we give in, and finally admit that we are wrong.  That is, if we admit it.  Sadly we may have fought against a certain truth so long that it has become a non-issue for our lives. We won the argument, but sadly lost so much.

That is so so sad.  The importance of keeping short accounts with the Lord could not be more obvious for me out of this short passage.  Be quick to admit your error, confess, agree with the Lord on the rebellion you may be in.

He is merciful to the wayward.  They (we) only want to accuse Him.  May we be more like Him and less like me.