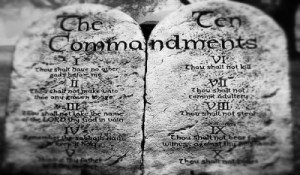 In my introduction to this series of blog posts, I drew attention to verses that supported my belief that the ten commandments were no longer applicable to the believer.

Verses like Romans 10:4, that I understood taught the law ended at the cross.

I hope you have noted that during our discussions in this topic, I found that the keeping of the ten commandments is a fruit of living in the Spirit, not a requirement to keep the Spirit.

Massive difference, and one which makes so much sense.  But what about those earlier verses?  I can’t just ignore them, or relegate them to some dustbin of irrelevance.  No no no – that won’t do!

So in this epilogue, I thought I would consider the verses that helped support my erroneous thinking earlier.

Our next set of verses will be found in Romans 10

For Christ is the end of the law for righteousness to everyone who believes.

The End.  What does that imply, mean and communicate?

He is the end, termination, the limit, the end to which all things terminate.  He is the termination of the law for righteousness.  Get it?

There is a different, a higher, a greater righteousness that is available for mere humans.  The moral code expressed God’s character primarily in negatives.  “Thou shalt NOT”.  The New Testament supplies the moral code in positive affirmations, such as

Let the thief no longer steal, but rather let him labor, doing honest work with his own hands, so that he may have something to share with anyone in need.

Prior to Jesus leaving the earth in His ascension, He said all authority was given to Him.

How much authority are you allowing the Old Law to have over your life?