Let’s Look for Something

the strayed you have not brought back

Notice a difference between the next two phrases we find in our study. The reason the sheep are not with the flock is twofold and God addresses both reasons.

God is addressing the bad shepherds and rebuking them for their lack of concern for His flock. I am assuming that both the lost and the strayed are those that are (or were) in covenant with God.

For this post, let’s consider the shepherds relationship to those who strayed, and lets define the term first. The Hebrew term is nadach.
נָדַח nâdach, naw-dakh’;

to push off; used in a great variety of applications, literally and figuratively (to expel, mislead, strike, inflict, etc.):—banish, bring, cast down (out), chase, compel, draw away, drive (away, out, quite), fetch a stroke, force, go away, outcast, thrust away (out), withdraw.

Notice this term generally speaks of outside forces acting on the one straying. A few of the translated terms seem almost violent – thrust away, banish, force, drive out.

True Shepherds Pull the Flock Together

15 Then the LORD said to me, “Take once more the equipment of a foolish shepherd. 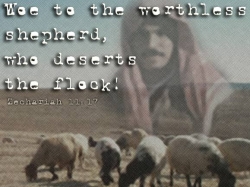 16 For behold, I am raising up in the land a shepherd who does not care for those being destroyed, or seek the young or heal the maimed or nourish the healthy, but devours the flesh of the fat ones, tearing off even their hoofs.

17 “Woe to my worthless shepherd,
who deserts the flock!
May the sword strike his arm
and his right eye!
Let his arm be wholly withered,
his right eye utterly blinded!”

Is Jeremiah repeating the same concerns of Ezekiel? Are the shepherds of Israel driving the flock away?

Let’s think about something for a minute.

Although I do not seek to draw an exact parallel between the OT shepherds of Israel and the NT equivalent elders, I can’t help but see some recurring similarities. I have been a part of the body of Christ for close to 40 yrs, and I cannot remember one time when an elder/pastor visited with me simply to visit with me. Of course when a death or marriage requires their service, it is appreciated. But something tells me that caring for the flock, simply for the flocks sake might make a tremendous impact.

When I lost my job a few years back, the ministerial staff decided to also ask us to leave the church. It was simply coincidental to an issue that we were discussing with leadership (see below), but in my mind, this emphasized a “business” aspect of the institutional church.

In the separate circumstance referred to above, they asked us to submit to three wishes of the church staff. Two out the three could be defended Biblically, and we would gladly submit, but the third was arbitrary, and in good conscience we decided against the request. Therefore the church staff “requested that we leave”. They actually said submit or step down from all teaching/leadership ministries.

It was a few weeks later that one of the deacons told us privately that we should just leave – we had stepped down from all teaching by this time. – no discussion or desire to converse about the situation – just do as we say! I don’t get it. It was obvious we would have to move out of the area to seek other work, but the staff had it in their mind to “let us leave”.

Does this make me think that I am one who is “driven away”? At one time I may have thought that, but I have to consider what I have been driven away from, that is an institution that found it to be advantageous to follow rules instead of seeking relationship.

You know, if they had some authority to defend their decision to “let us leave”, it would be a different story. I would gladly defer to Scripture. All through the years we had attended this congregation, I had constantly deferred to leadership decisions, asking the Senior Pastor for permission for each action I was taking.

When asked about the reason for this ultimatum, it was simply stated that they were the authority – of course not in so many words, but there was no Biblical considerations discussed.

I guess, but I am not convinced that Ezekiel would consider this particular instance to be of any concern.

You see, I think I have been “driven” into a better place, where the Spirit of the Lord is allowing more freedom to see His Church as compared to my previously myopic perspective.