the sick you have not healed

We are going to continue in Ezekiel 34:4, and with this blog, we will look at the second clause of Ezekiel 34:4.

Good shepherds heal their flock, seek the flocks health, look for signs of life and pray for the best for the flock.

Remember that the principle complaint against the shepherds of Israel in Ezekiel’s day was that they did not feed the sheep. The following clauses show how their utter disregard for the sheep, (typified by their not feeding the sheep) was expressed in other ways. The issue in this blog is that the shepherds were not healing the sheep.

“The Spirit of the Lord is upon me,
because he has anointed me
to proclaim good news to the poor.
He has sent me to proclaim liberty to the captives
and recovering of sight to the blind,
to set at liberty those who are oppressed,

I have placed the passage in Luke 4:18 as a primary reference due to the clarification it gives me about what is being healed. Jesus healed physical sickness when He was on earth (and He still does) but the emphasis of His healing ministry is spiritual.

If I get healed of a sickness today, tomorrow I may die. Healing of sickness is a wonderful gift of God, something that is granted to the believer and non-believer based solely on the mercy of God.

Spiritual healing is a potentially eternal condition, that has ramifications in this life and the one to come. His ministry is to heal the sheep of a greater sickness than mere cancer, heart disease or a brain tumor.

When the crowds learned it, they followed him, and he welcomed them and spoke to them of the kingdom of God and cured those who had need of healing.

This verse is definitely speaking of physical healing, but the point I would like to draw your attention to is that He healed them that realized they needed healing!

He came to call the sick so that He might heal them. To find healing, one must admit to their illness. This admission of illness (spiritual) may seem counter-intuitive, even fearful, but this verse teaches me of the desire of the Good Shepherd – He will heal all those that need healing.

Is it too much to say that He is anxious (I speak foolishly) to heal those who seek Him.

A True Shepherds Motivation for Healing

Lets consider the motivation for the two types of healing (physical and spiritual) from the perspective of the Great Healer.

24 He himself bore our sins in his body on the tree, that we might die to sin and live to righteousness. By his wounds you have been healed.

Of the many verses that speak of healing, the passage in 1 Peter draws me in. Did the atonement grant physical healing to those who have enough faith?

A while back I was chatting with a Word of Faith preacher concerning physical healing and the miracles that his church regularly experiences. I asked him about a couple of issues that concern me.

My first question was “Does 1 John 1:9 describe forgiveness as an act of mercy on God’s part?” He agreed, yet I drew his attention to the phrase “faithful and just” in the verse. This phrase tells me that the reason God forgives His people of the accidental sins they commit is due to His faithfulness to the righteous (just) conditions His people are under, not an emotional response based on our strong(?) faith.

When we confess our sins, HE FORGIVES.

In other words, God forgives His people because of the “covenant/contract” He has entered into with His Son, due to His Son’s obedient sacrifice, and our relationship in Him.

It is not an act of mercy that motivates God primarily, but His faithfulness and justness that motivates Him to forgive His people, if we confess our sins to Him.

The second concern was logical. I pictured what I imagined as a typical gathering at his young preachers church. Say one person gets a healing due to their faith. What about the “99” others. Granted some may not need healing. Some may, but do not receive. What does that say about their status of being a believer?

It seems that if I were in the crowd, and listening to the teaching that the death of Christ afforded all believers (who had enough faith) to claim their physical healing, and yet not receive a healing, I would begin to question my salvation.

After all, if God won’t heal a temporal sickness, what makes me think He will heal my eternal sickness.

This young preacher admitted to not having considered these topics. He seemed to be an honest man and I appreciated his willingness to discuss these issues. I believe he has a sincere desire to be healing the flock, but his zeal for God may not be according to knowledge. 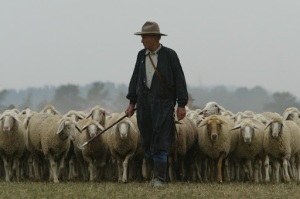 If you are associated with a group that is abusive or harmful, and not reflective of the Good Shepherds character, it may be wise to consider the Master and listen to His voice.

His sheep hear His voice