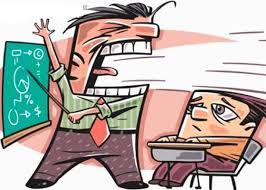 A short while ago, I attended a small Bible class, with a teacher and four students in attendance. The topic is of little consequence since the manner of discussion is the topic of this post.

Prior to the formal teaching portion, the teacher and a student were discussing racism and prejudice, and the feelings that the student was experiencing regarding personal interactions with a race not her own. The discussion elevated to the point where the teacher warned the student that if she refused to change her feelings, she would have to leave the classroom. The student (I think) simply regarded the threat as a hollow remark and mentioned the topic again, stating she feels a certain way. Again, the teacher threatened the student that she would have to leave his class.

At this point I shut down. I stayed in the class since a good friend asked me to come, and I didn’t want to create more friction, but I was dumbfounded.

And the servant of the Lord must not strive; but be gentle unto all men, apt to teach, patient, (KJV)

And the Lord’s servant must not be quarrelsome but kind to everyone, able to teach, patiently enduring evil, (ESV)

And the Lord’s slave must not engage in heated disputes but be kind toward all, an apt teacher, patient, (NET)

And I considered what was driving this teacher to feel so threatened by honest discussion. I have had a few conversations with this teacher previously and he seems sincere and desirous of pleasing the Lord. I have noticed though, that when challenged on certain teachings, he depends heavily on teaching he has heard from professional Christians over the radio or internet, or from books (other than the Bible) that he has read.

I feel this student may have been opening a door to honest discussion, and a possible venture into a specific focused consideration of what the Bible has to say about racism, judgement and forgiveness.

As the verse states, the servant of the Lord should be kind, able to teach, and patient. Alas, the class experienced anger, condemnation and impatience from the teacher.

At the end of the class, when asked if anyone had any questions, it was not surprising to hear the crickets chirping.

Since then, as I have thought about this experience, I seem to be drawn to another passage in the New Testament that may be applicable.

And it came to pass, when the time was come that he should be received up, he stedfastly set his face to go to Jerusalem,

And sent messengers before his face: and they went, and entered into a village of the Samaritans, to make ready for him.

And they did not receive him, because his face was as though he would go to Jerusalem.

And when his disciples James and John saw this, they said, Lord, wilt thou that we command fire to come down from heaven, and consume them, even as Elias did?

But he turned, and rebuked them, and said, Ye know not what manner of spirit ye are of.

For the Son of man is not come to destroy men’s lives, but to save them. And they went to another village.

They did not receive Him.

Why did the Samaritans not receive Him? The Samaritans came about due to the splitting of the theocracy after Solomon’s time, and to keep the people of the northern tribes happy, established a temple and had their own “expectations”.

When the two messengers (the Greek word is “angelos”) went ahead into the Samaritan villages to prepare for the Messiahs arrival, the Samaritans rejected Him. Why? Because His face was set to go to Jerusalem.

But the true temple, according to the Samaritans, was at Mount Gerizim. If Jesus is going to walk through Samaria, (which He was planning on) surely He intends to validate the Samaritans beliefs. Visit the temple and congratulate the Samaritans on their achievements? Who know what the Samaritans were expecting. But they didn’t want to see the Master go to the competition temple – that is for sure.

I found a list practical applications for this concept while ruminating in an old commentary, called Barnes’ notes on the Bible.

All of these truths I have experienced internally for years, and still struggle with. I suppose the point I identify most with is number 3. I mentioned on the “About” page of my own struggles with considering alternative teaching. I confess that this decision brought many challenges and doubts, but also expanded my understanding of the message of the Bible!

So what did the disciples do about the Samaritans reaction to the Master? The natural, normal, easy thing to do! Lets kill em! Let’s just shower fire down on these Samaritans. That will teach them! Condemning others based on their beliefs is natural. It is the normal condition we humans find ourselves in. It is not the lowest level we dip to but the normal reaction of our heart towards others. It is easy.

Jesus rebuked them, stating that the disciples didn’t understand the spirit they were of.

The disciples thought they were engaging in religious zealotry, like the prophet Elijah. Jesus informed them they were not following after the spirit of the Master, but reflecting a spirit of destruction.

The disciples were completely confused. I suppose they hadn’t had a chance to read and understand the apostle Paul’s instructions!

And the Lord’s servant must not be quarrelsome but kind to everyone, able to teach, patiently enduring evil, (ESV)