Did you hear what I heard about….
What a trap to fall into – the curiosity that gives us the drive to learn and grow, becomes the fuel to find out dirt on our brother or sister. Eventually the little tidbit of information on a brother or sister becomes a monster, ending in the inevitable character assassination of a man who could not defend himself.
It reminds me of a story I heard many years back.
A story of a man convicted of gossiping went to his priest to ask for forgiveness and penance. The father instructed him to take a pillow of feathers to all he had gossiped with and place one feather on each of his friends doorsteps. After doing so, he returned to inform the father he had done his penance. The father told him to retrieve the feathers. Impossible he said.
Gossip is such a “light” sin, and yet it spreads with such freedom.
Take a few minutes to consider what the Proverbs have to say about this commonly ignored, and even less discussed sin that destroys peoples lives.

Proverbs 11:13
Whoever goes about slandering reveals secrets,
but he who is trustworthy in spirit keeps a thing covered.

Proverbs 17:9
Whoever covers an offense seeks love,
but he who repeats a matter separates close friends.

Did you get that? Keep certain things covered!

My mamma used to say that we shouldn’t air the neighbors dirty laundry. Of course, at the age of 5, I was confused about why she would even think about their laundry, but now I get it.

…Love covers a multitude of sins…

I wanna be careful here.

To discuss a sin with someone other than with the wrongdoer is gossip, slander and character defamation. Don’t do it.

Easy for you to say Carl!

Yes it is easy for me to say, and I fully admit the gossip bug is a powerful influence if I walk in the wrong spirit!

Proverbs 25:23
The north wind brings forth rain,
and a backbiting tongue, angry looks.

I am thinking the north wind, in the Israeli mind, always brought rain from the north. A backbiting tongue will also bring angry looks (eventually).
How often have you found out of a gossip actively telling stories (true or false) about you or a loved one? My initial response is always with anger when I see the culprit.
Is it natural? Of course.
Is it right? Of course not, since as a Christian, we need to exercise forgiveness. Notice that the term I use is “exercise”.
Does it sometimes hurt? To my self pride – sure.
Does it make me weary? Sometimes, since it seems so unfair, if I get my eyes off the Master.
Can I forgive quickly? How are those forgiveness muscles doing Carl?
Remember the old saying – If you don’t use ’em (you know – your forgiveness muscles!) you may loose ’em.
That would be a shame! 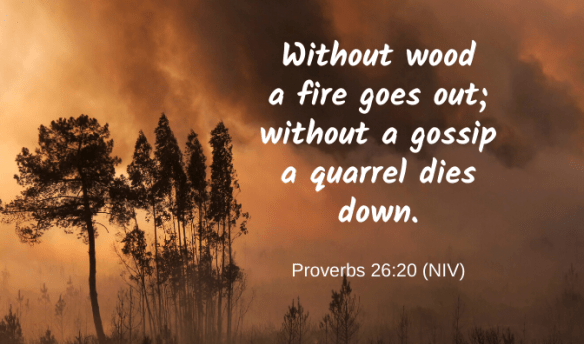 Thanks for dropping by.
Drop a line if you get a chance, and have a good day in the Lord.